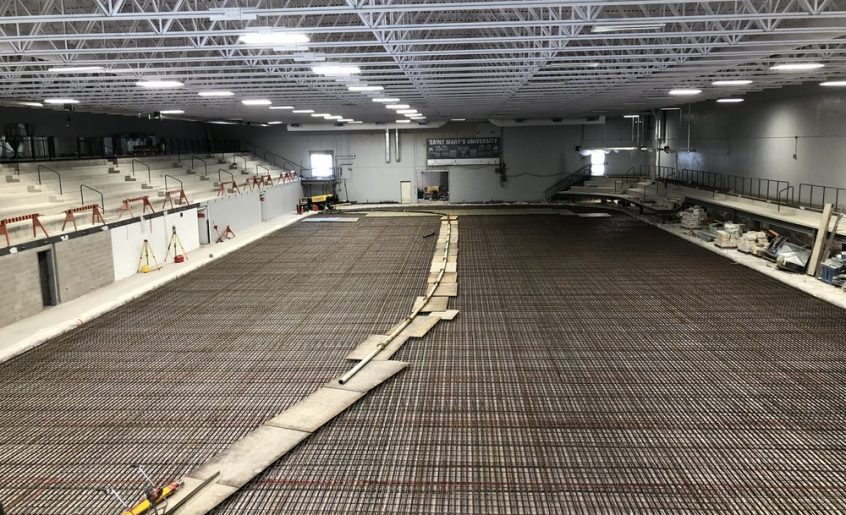 Saint Mary’s is exploring the possibility of a shared hockey arena with Dalhousie.

“I would say it’s preliminary, we’re  certainly chatting to see what the options are.” said SMU spokesperson Steve Proctor, “There is a joint proposal that is looking for government assistance to make it all work.”

The two universities, Saint Mary’s and Dalhousie, have submitted the concept to Nova Scotia’s excellence and innovation fund for some financial support, which was created while the province was trimming money provided directly to universities through operating grants. By splitting costs between the universities, the city, and the provincial fund, the financial impact on any one group would be reduced.

“We have an ongoing relationship with the Forum while something is figured out.” said Proctor. A long-term solution for both universities hockey teams has yet to be finalized, at SMU the men’s hockey team has played out of the Forum since 2003, and Dalhousie tore down the Memorial Arena in 2012.

“There certainly have been discussions with the city,” said Proctor. “Dal kind of took the lead on it, and we’re co-applicants. It’s a two-pad arena that will serve the needs of the two universities.” A smaller arena than Bedford’s, which boasts four skating surfaces in order to share resources, custodial, and equipment such as the zamboni.

“If HRM can partner with SMU and Dal, so that they are spending less money than they would on their own, and that helps us bring our own costs in line,” said City councillor Waye Mason. “And finally, if we can save the universities money… That’s a great role for the city to have, is to help bring the players together and help save the universities and the taxpayer money.”

While Mason is in support of the idea, he said the idea is still on the drawing board. “There are no plans in a briefcase, nobody is at that stage yet.”

Mason estimated a cost of $25-30 million for a two-pad arena, which is what would fit on the Gorsebrook site, as opposed to past ideas for a four-pad arena, which he pegged at $45-50 million. While it would be more expensive from a maintenance perspective to have multiple sporting locations, there are other factors to consider.

“It’s a little bit more expensive on the capital side, but with SMU and Dal bringing a reported $10-15 million to the table, then we’ve got to analyze all those figures.” said Mason. “Maybe it’s only a one-pad with a recreation centre, or a one-pad and Halifax Curling Club puts of a facility next to it. It’s literally at that point where it could be any number of things.”

Meanwhile, SMU is keeping their options open as well during ongoing discussions, as long as a solution is on the horizon. “The arena is getting old, a little long in the tooth,” said Steve Proctor. “We’re open to all alternatives, the thing with Dal is one option, but we’re open to suggestions from all levels; the government, public sector, or private sector.”